The Digital Voice ( DV ) for the ham radio have started a few years ago but to build a hotspot ( a tiny personal half duplex repeater ), you will need some pricey equipments like DVStick with AMBE-3000 vocoder and USB interface plugged into a Raspberry Pi with an Arduino Mega to drive the UHF transceiver.

It all started around Sept 2017 when the price of DMR radio was getting below RM1,000 and a few of us purchased a TYT MD-2017, one of the more popular DMR radio at that time.

Secondly, without a DV hotspot, having a DMR radio is kinda useless unless you are within the range of a DMR repeater in your area.

Thanks to Jonathan Naylor G4KLX ( https://github.com/g4klx/ ) (and many many people people) that created the MMDVM, a software that integrated multiple hardware ( teensy, Arduino DUE, STM32F1, STM32F4 ) and Raspberry Pi running pi-star ( https://www.pistar.uk/ ).

When I saw the hardware requirements, I noticed that I actually have ALL the hardware with me, STM32F103 red-pill, Raspberry Pi and they were also using a version of Arduino called stm32duino.

The only missing piece was the UHF transceiver called RF7021SE module plus changing the TXCO to 14.7456Mhz. So I started doing my research on different board designs and immediately design a single board layer to test out my design.

Here is the first version after many iterations and because it was a single layer board, I had to place the SMD LED at the bottom of the board.


Once my designed was almost finalised, I bring it to Uncle Chow ( 9M2CF ) to convert my PCB design to a single layer PCB.

After some UV exposure and chemical baths, I got the SVT MMDVM board ready to be soldered.


Fully connected to the RPI 1 and pi-star software loaded.

This is just a short post of measuring the capacitance of the variable capacitor at maximum capacitance..

The first picture is the measurement taken at both the stators ( stationary plates), this is used for magnetic loop as per the diagram below.


The below picture measure the capacitance between the stator (stationary plates) rotor ( moving plates). 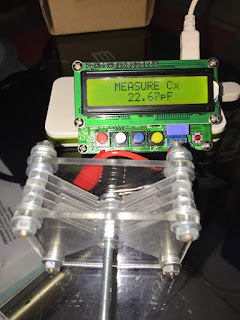 A short posting with pictures of variable capacitors made using a CNC machine by 9W2CEW. The CNC cut both the rotor (moving plates) and stator (stationary plates) in one go. Refer to the last picture below.

This design is usually found in loop antenna to change the capacitance value from the shaft. 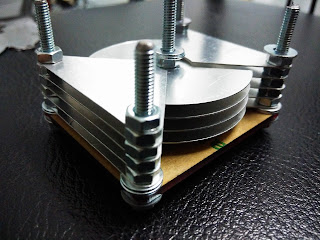 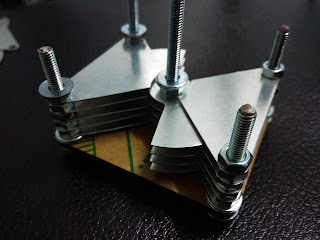 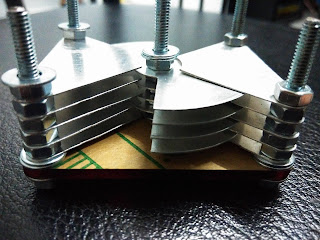 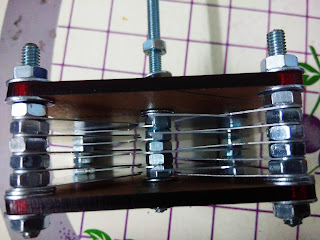 Just want to share an updates on balcony antenna using the following setup :-

This is the reading of the antenna analyzer at JT65 frequency, complex impedance of  25 + j0, SWR of 1.26:1, therefore I do not need to use any antenna matching tuner. When I transmit at 25W, the meter reads an output power of 20-22W going out to the antenna.

The antenna analyzer is a version of SARK100 called MR100. The details at summary links below.

The below is the result of the short 40m balcony antenna, I am able to reach both Europe and USA using it.. In my condo, I am almost surrounded with highrise buildings and not much openings.

SVTrackR with new PCBs and case for the LCD

Making of the acrylic casing ...

In my learning process of making my own DIY PCB and after ordering some common SMD components ( capacitors, LEDs &, resistors ), I decided to design a small and functional TNC that only need 4 connections to handy and a few jumper wires to Arduino.

*** This is the first time I ever successfully made a DIY PCB.

Let's start with the design on EagleCAD ..

I designed this small 28x23mm board for fun and to learn on how to solder SMD parts on DIY PCB. I made everything on a single layer. The only drawback is the two red and green LEDs are at the bottom where the copper traces are located.

Generate gerber and do a 3D view of the board. This method is easier to spot any errors.

This is the tracing paper before the UV treatment. Thanks to Uncle Chow, 9M2CF made me a nice photo frame to hold the UV sensitive PCB and tracing circuit in place.


After like 15mins ( long duration was due to the diffused and evenly distributed UV light ), I drop the PCB into sodium hydroxide 0.7%. This is removed whatever parts exposed to the UV light and leaving the green part for second steps.

Once the Sodium Hydroxide bath was done, I wash it and dump into the second solution - Ferric Chloride to eat away all those exposed copper.

After a few shakes and turns, all the copper were wash away leaving the green portion of the copper traces. 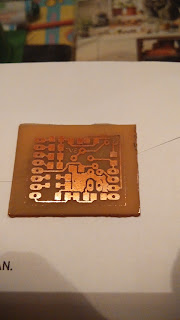 I use thinner to clean away the green stuff and leave you with a shiny copper traces. Not bad for a first timer doing SMD PCB.

Now for the drilling and soldering part. A tip from 9M2CF, always solder before drilling as the solder will guide the drill bit into the holes to be drilled.

With too much solder at the pads, those SMD 1206 resistors are uneven on top ... or I was using a really fat tip.


After a while, got all the SMD and through-hole parts soldered. Need to find the SMD parts for the 100K POT. This is the one I currently have in my part inventory. 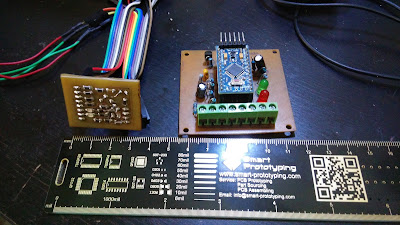 Comparing sizes between the old MicroModem with Mini Pro and the new SMD TNC that will run from either Arduino Mini Pro or Arduino Nano.